Notification overview: configurable/filterable/sortable/multi-column notifs, for usability and catching up (with design example and functional breakdown)

started a topic 13 days ago

Lately, I have found myself using Cohost less than Twitter again, a situation I would prefer to reverse. Part of the issue is that it's become difficult for me to keep up on here.

A lot of folks interact with my posts, and it can be very hard to manage when I throw out a couple shitposts and come back to "99+" and it's mostly likes. Notification coalescing improved this markedly, but it's still very easy to miss comments and replies I'd like to see.

I'd love an optional Tweetdeck-style view optimized for dealing with larger amounts of notifications. There was a chrome extension by bucketfishy that provided something like this, mostly but not completely obsoleted by the coalescing update. It stopped working then, as its main feature was built into Cohost, but the site is still not as usable for me as it was with this (screenshot from github):

Basically, this took one screenful of notifications, put ones with written content on the left, and put "alert only" ones on the right. Hitting load more would load more screenfuls behind what was shown, and "reload" would sort them into the columns. Hacky, but it worked extremely well for keeping track; I wouldn't miss anything.

Thinking about how I used it, the important design features of this that were most beneficial for my use of Cohost were:

• That notifications were sorted into two columns, one for "comments and replies" and another for non-contentful actions, ensuring I wouldn't miss any written responses to a post

• That I could keep hitting "load more" until I saw a notification I'd seen last, and then process it all at once, receiving a sorted overview of all the notifications that had come in for that timeframe.

• That it showed usernames densely by default. Ordinarily on social media sites I am better at identifying people by their avatars, but the ones in Cohost's notification feed are so small that it's troublesome, and seeing a long list of people on their own line in a dropdown seems to add undesirable mental friction to comprehending the whole, at least for me.

The main functions I would add to this feature in addition to what was accomplished by the browser extension are the following:

• Configurable/automatic chronological window: "show all new notifications since you last checked the overview" would seem to be a good default here.

• Configurable sort/highlight/filter option: being able to highlight or otherwise distinguish notifications from people I follow, or from a chosen list of users. It feels rude to call it "noise," but as more people read and like my posts, it becomes very easy to miss when people I know interact with them, because it's buried in the notifications with dozens of (assuredly lovely) people I don't know.

• Configurable display options: being able to choose to configure density (users on their own lines), and whether to display usernames/avatars/both, as well as to configure avatar size, would go a long way toward accessibility and quick comprehension for me.

The grand overview of the desired feature is thus: a notification view that provides a sliding window of adjustable chronological coverage, from now to a given point in the past (whether it's a chosen time or "since you last read all your notifications"). This view presents all notifications received within this time period in multiple sections, divided into (in a hierarchy of increasing granularity): contentful/action-only, type-of-action, which-post, which-action. The display of this view is configurable, to allow users to choose display methods that are most accessible for them, and to easily pick out others whose notifications they want to prioritize. 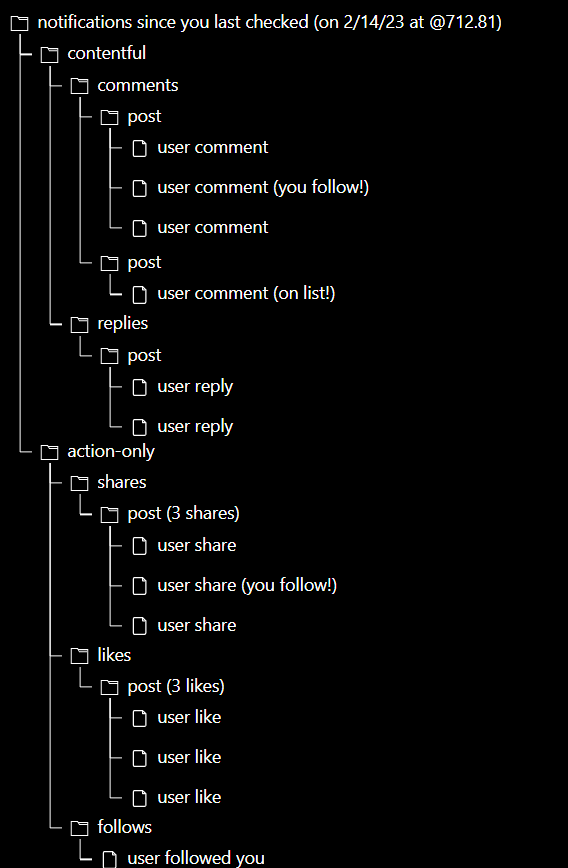 (Columns and subsections, as in the original extension, would seem like an ideal way to do this, but it could be designed in any number of ways).

The total effect would be to make the total of other users' interactions with me easily comprehensible, by dividing and sorting user actions by their type and target. Precise chronological order becomes less important, in favor of a full overview of the time period selected, shown in a single page.

On Twitter, with more followers than is mentally healthy, my solution is to turn off notifications from people I don't follow entirely; if I hadn't done this long ago my brain would have melted completely by now.

Both Twitter and Cohost feature basic chronological coalescing only:

Cohost: from what I can tell, a set of actions is fully coalesced into a single notification, but the coalescing occurs divided by pagination. Hitting "load more" results in a new set of coalesced notifications. I may not be fully correct about how this works.

Neither of these provide an optimal view of "how have folks interacted with my posts since I was last here." I think what I've proposed fixes this problem, in a way no other website (that I know of) has implemented.

Cohost's still a new website, and it's a simple one, but adding thoughtful usability features is something it's been very good at so far. For me, the ability to easily catch up and comprehend my notifications in this fashion would allow me to spend less time managing the site and more time enjoying it. The Dread 99+ would no longer be a slog to look through.

I think something like this would go a long way toward ensuring the site remains usable as it grows, and as the social networks of its users become larger and more densely connected.

An addendum, which I can't believe I forgot: if a post on here goes viral, notifications become completely unusable for as long as it is popular, and it is assured one will miss things one cares about, due to the per-batch coalescing making the list all mixed together. This discourages both intentional and accidental virality. Discouraging the former is likely desirable, but I hate making a funny post and then being unable to use the notifications feature because it was too funny, or worrying about messing up my friends' experience on the site by sharing their posts.

Improved per-post coalescing for a given time period, and the ability to easily hide that post from the overview, whether temporarily or permanently, would eliminate this problem. Could also add the granular ability to "hide likes from this post," and so on.

I really love the idea of splitting out the text-based things (comments / replies / share with replies) with likes/follows (I'm not sure where empty shares sit here - maybe in the first but combined?).

Empty shares would go in the column with likes and follows since they contain no information besides notification of an action, and can thus be coalesced.