started a topic 3 months ago

Notifications on the cohost website are currently rather overwhelming. To make them more manageable, I think it would be nice if “uninteresting” notifications (likes, follows, and transparent shares) were coalesced together into a single item, instead of taking up the majority of the notification feed: 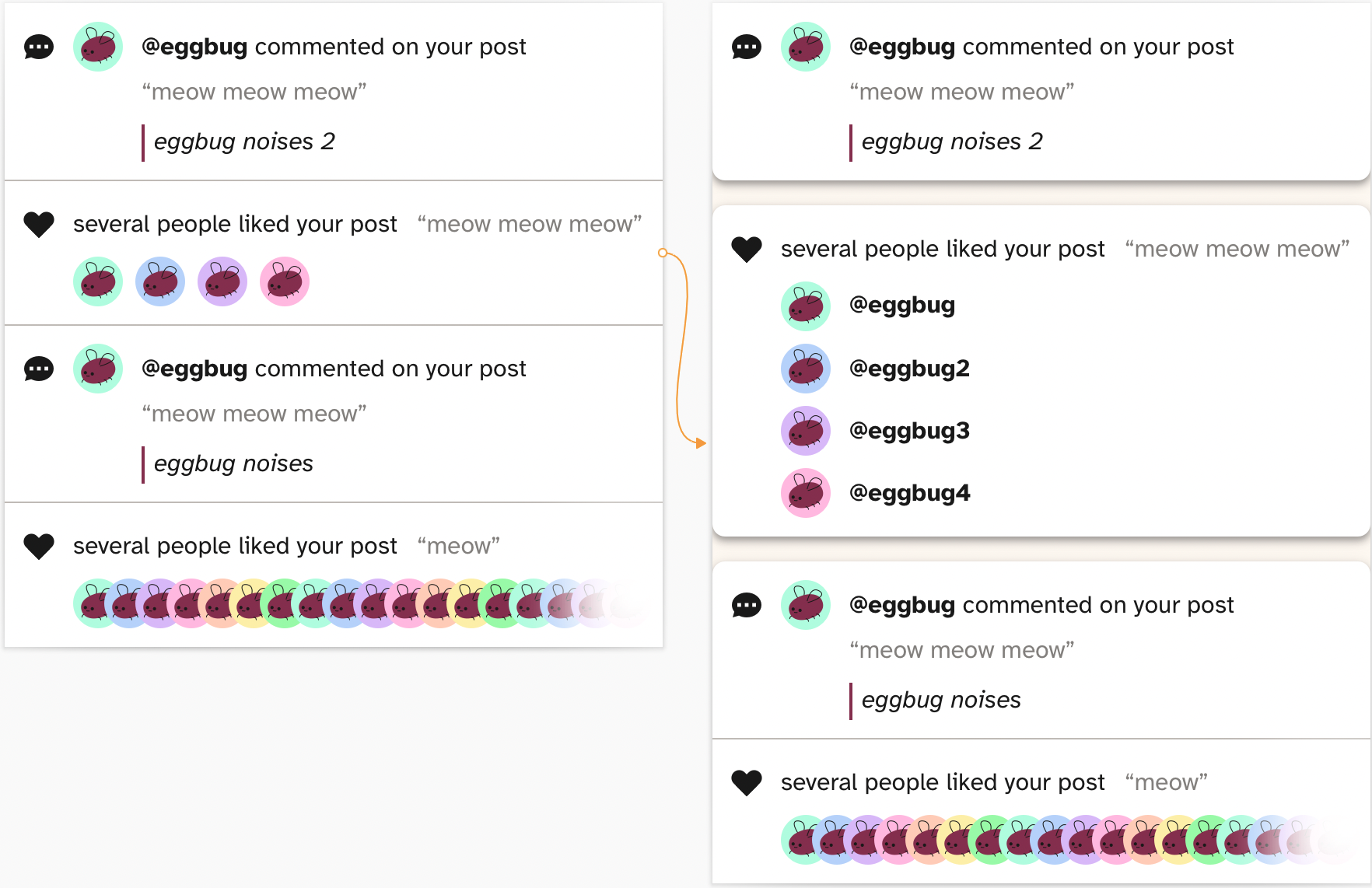 last i implemented this i had the client fetch 100 notifications at once and collect all similar items into the newest item, but there’s probably a better way to do it maybe…

I really like this - particularly the idea of collecting reactions to the specific post within the last [timeframe]. I guess it depends on how prolific a poster you are as to how annoying it might be to have it be per post vs in general (across multiple posts), but it'd be nice to be able to easily jump to see comments/replies

One of the issues i've had with twitter's coalescing of notifications is that it can become real easy to lose your place.  that said, a little coalescing could go a long way, just as long as you don't change the chronological order of notifications

my brain will see the last like and go "oh i've seen this already" and forget to scroll down.

My following and activity on cohost is currently still small enough that this isn't a problem for me on cohost just yet, but on Twitter, one of the big problems with the way notifications are presented is that there's no grouping by thread. If 100 people like or retweet one particular tweet around the same time, that's condensed to two notifications. But, all the replies people make don't get grouped like that, so if you get a single very popular tweet that spawns a lot of discussions in replies to it, it overwhelms your notifications and it's difficult to see things that are related to other threads. It's also the case that a single thread can have many tweets in it, and those tweets become separate notifications! It's worse if you have multiple popular tweets at the same time, or if you have one thread that has sustained popularity over a long period of time.

So in addition to the aggregation of similar events (likes, follows, reposts), I want to suggest a related feature: grouping of notifications by originating post/thread.

Without this, I think having just a single popular post can make notifications overwhelming, and I might miss interesting replies to less popular posts that have the misfortune to be timed at the same time. On Twitter, eventually I usually end up “muting” a particular thread, but I hate doing that, because there might be future replies that interest me. Having grouped reactions like this would perhaps reduce the demand for muting as a feature, at least for people like me.

Another benefit I can see is that more screen real estate could be spent on showing a snippet of the original post, since that space can be shared between all related notifications. On mobile currently, I have a hard time keeping track of what post people are reacting to, because it all looks like:

I should have mentioned: another reason to aggregate stuff like this is that it helps you to keep track of context. This is particularly valuable when you have comments on comments; currently, when someone replies to a comment, the notification doesn't include the original post, so you can be quite lost.

I'm sure someone would say “you can always click through to see the original context”, and that's not wrong, but let's imagine you receive ten replies to different comments across three different posts. If they were grouped by post, you could open just three browser tabs, one for each post, and keep context-switching to a minimum.

i have a lot of followers apparently and this has made my notifications essentially useless, given the identical weight of "person you don't know liked your share" and "Treasured Friend replied to your comment"